From Dream to Reality

05 Jul From Dream to Reality

It’s Monday morning, late January 2019 at the Roscoff Biological Station as we sit together in Colomban de Vargas’ office, overlooking the sea. The goal of our meeting is to define what we want to do for the coming year. Of course there is a focus on science, technological development and human resources, but also, and above all, on art and exhibitions.

In fact this project has been alive for a few months, thanks to sponsorship of the Total Foundation, on a theme that has been named: Plankton & Arts. 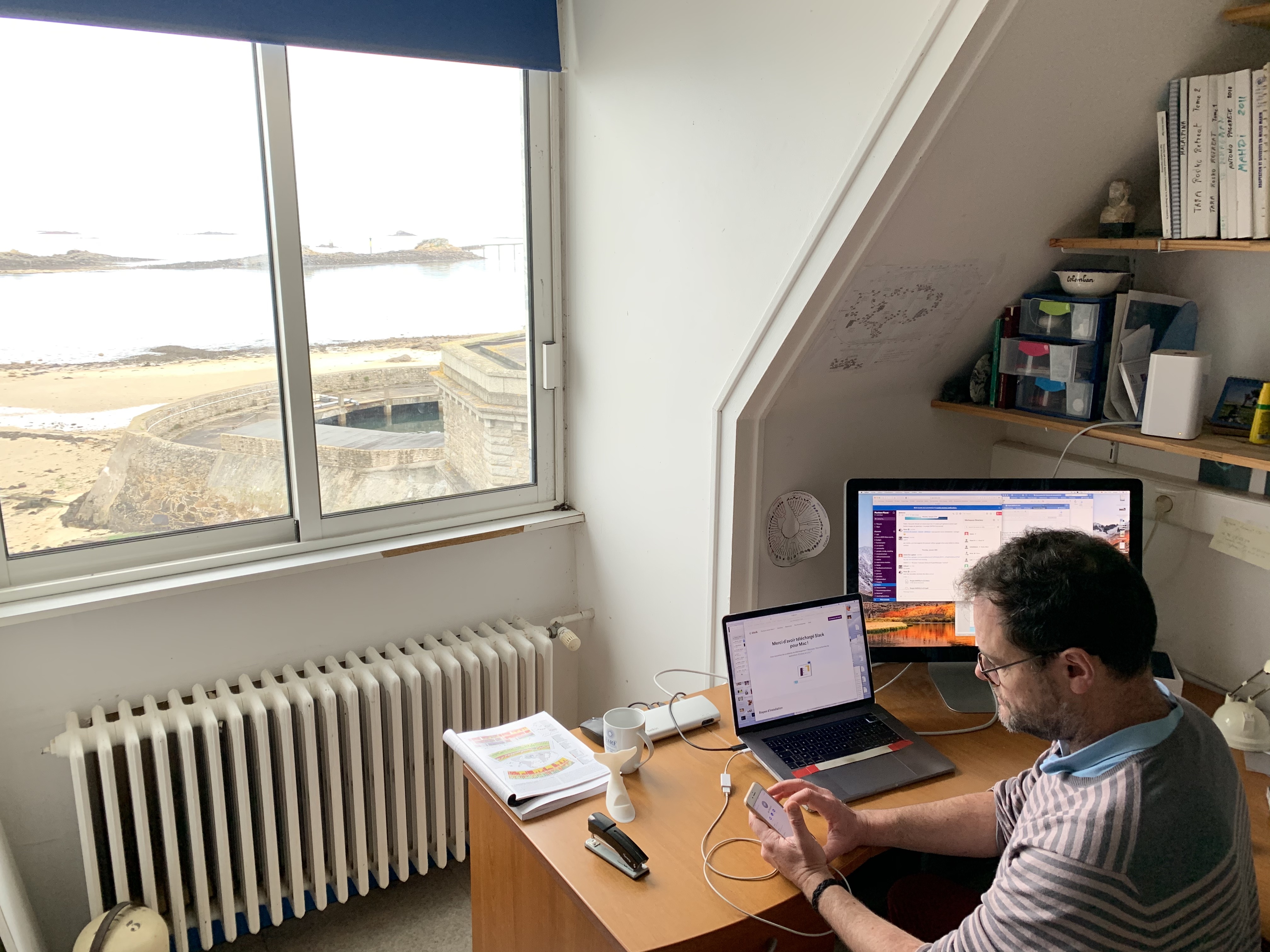 For some years, we have been thinking about designing an exhibition that would allow us to display the superb images that we produce every day in the laboratory. Almost 2 years previously, on a retreat in New Zealand that brought together all the actors of the project, we carried out our first test in the Auckland Maritime Museum; we were convinced! The second test, conducted the summer after, this time in San Diego, had also been a success. Several artists we met on the Tara schooner had mentioned their interest in plankton as a source of inspiration for their work, and above all we had in mind the Planktonauts, who want to see what they collect.

To do an exhibition, you have to define what you want to show, what message you want to convey. We know the exhibition location is key, since this will define how we can get the message across, what type of audience we can attract.

We are lucky, a big event has been announced for 2019. It will take place in the large exhibition center of Nantes and will be devoted 100% to the marine environment. Its name: LA MER XXL. A hundred thousand visitors are announced for over a two-week period in early July. The decision is made in minutes: we are going to be there and I will lead this beautiful project. 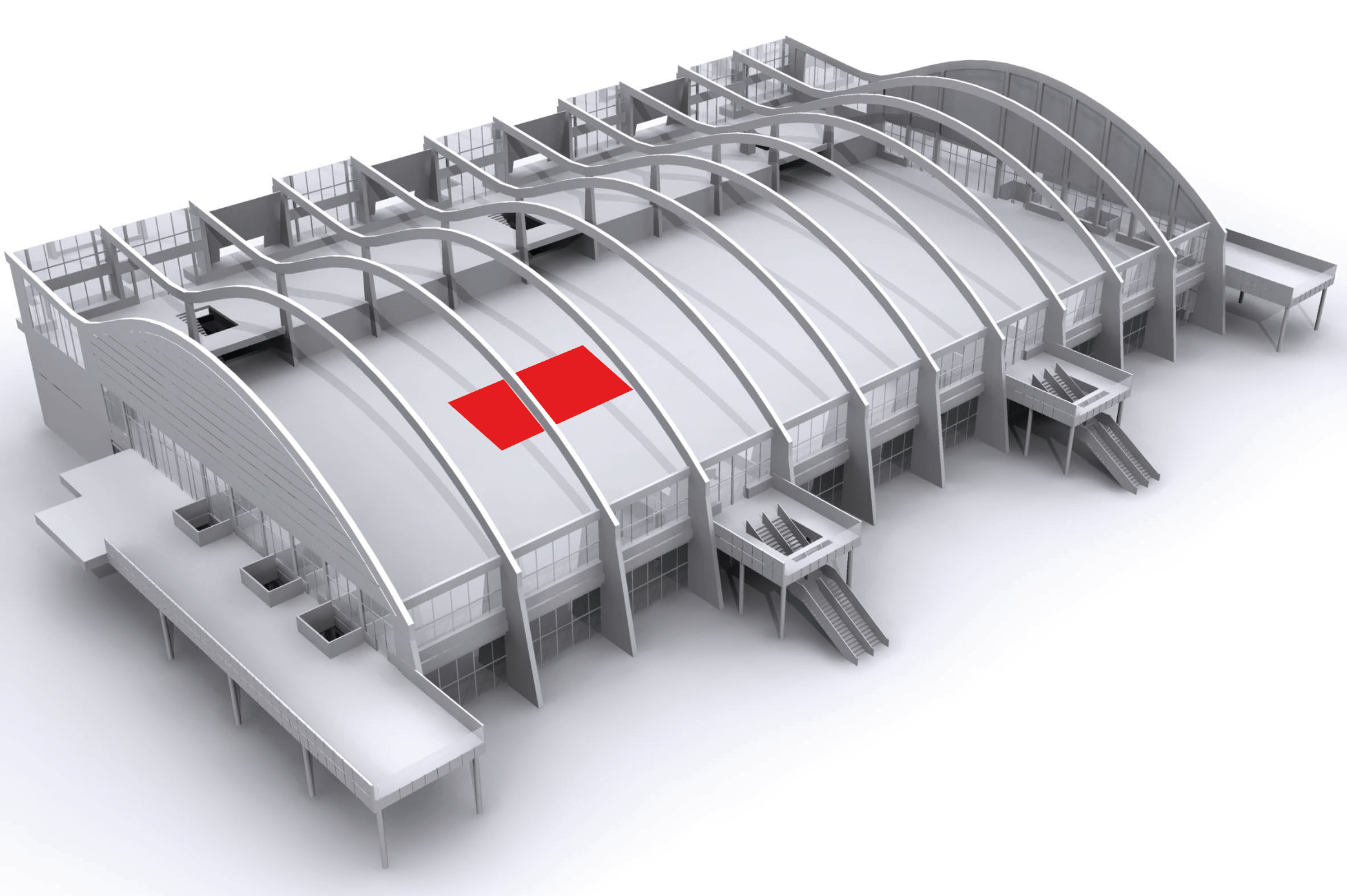 We are already in February! Time flies! I have reserved a space of 100m2 in a hangar with carpet (no choice there), an electrical supply, and a 15m-high ceiling. For the rest, I have lots of ideas, but we have to see how we’ll be able to realize them…

Another meeting in Roscoff: it’s an important moment, we now have to decide the focus of our exhibition. We agree to work on the theme of single-celled organisms, an area that has been poorly covered so far in exhibitions, and on which we have many resources thanks to the imaging efforts of Sébastien Colin.

I explain to Colomban my idea for the ​​scenography: a large geodome, 8m wide and 6m high. It will emulate the structure of a radiolarian – a sub-millimeter sized protozoa with an intricate mineral skeleton – and it will be easy to spot from afar. All around it, images of plankton will highlight their diversity, while inside only images of unicellular species, together with 3D-printed skeletons. Outside the dome will be a large cabinet of curiosities with glass plankton sculptures made by a glass artist, and a large donut-shaped table for people to watch living plankton through our prototype microscopes. The whole exhibition will be modular and easily transportable.

Colomban lets me finish, looks at me calmly and says to me: “You know that you only have 4 months to create this exhibition, that you are on your own and that your budget is a maximum of 40,000€ all inclusive. Isn’t that a little over-ambitious?”. Ouch! He is right… it would indeed be much more coherent and reasonable to make an exhibition on panels with photos and to provide a classic table for microscope demonstrations… An estimate for my idea recently came back at around 120 000€…

My answer: “Exactly! And it’s because it’s ambitious that we’re going to do it! “. We smile, but I can see that no one feels reassured.

One day at the beginning of March, at 8 a.m. I am at the lock of the Morlaix marina, standing in front of a black shed that reads: “Ponton Z, Da Bep Lec’h craft brewery”. No, this crazy idea hasn’t made me turn to the booze, I can assure you. But thanks to the small Plankton Planet family, I am no longer alone in my wacky endeavours. David Le Guen has joined me. His studio is upstairs in this hangar. Surprisingly, I didn’t have much trouble convincing him to follow me on my adventure. David is an outstanding designer, artist and producer. His passion is to create, to manufacture… and of course to sail. He previously worked for Plankton Planet with Thibaut Pollina for the creation of the first microscope prototype, the PlanktoScope. 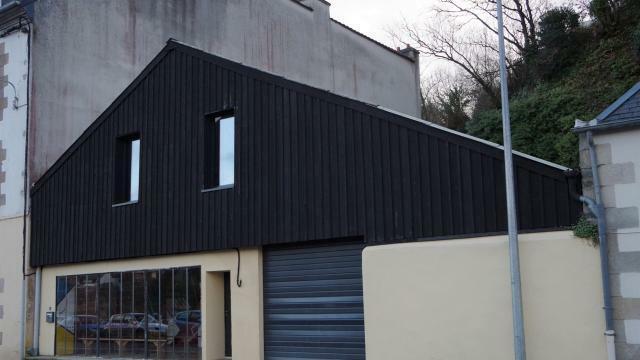 We have a gigantic task ahead of us, and the challenges are many…

First thing, the dome: we decided to have it manufactured by a young entrepreneur – Adrien Van Robaeys – because time is against us. We would have loved to do it ourselves, but we have another major challenge to devote ourselves to: finding a way to fix pictures around a hemisphere, with individual lighting, in a manner that is safe. It seems simple at first glance, but little did we know we would spend a whole month on this, with days of 10-12h designing, testing, failing, and retrying until finally; success! The final object is not simple to produce, it takes us many hours of cutting with a CNC milling machine, making parts with the 3D printer and then assembling all the elements between them. 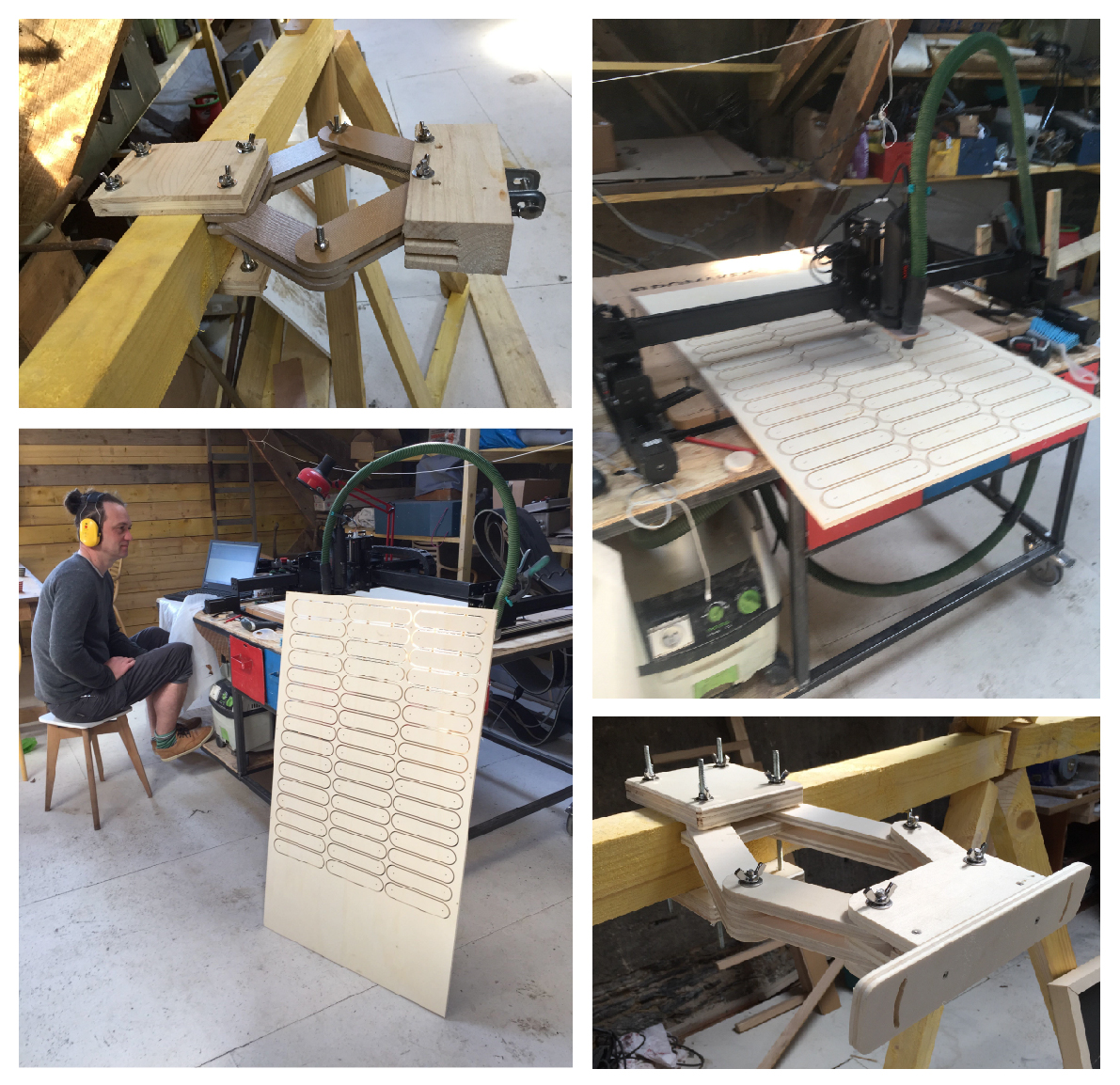 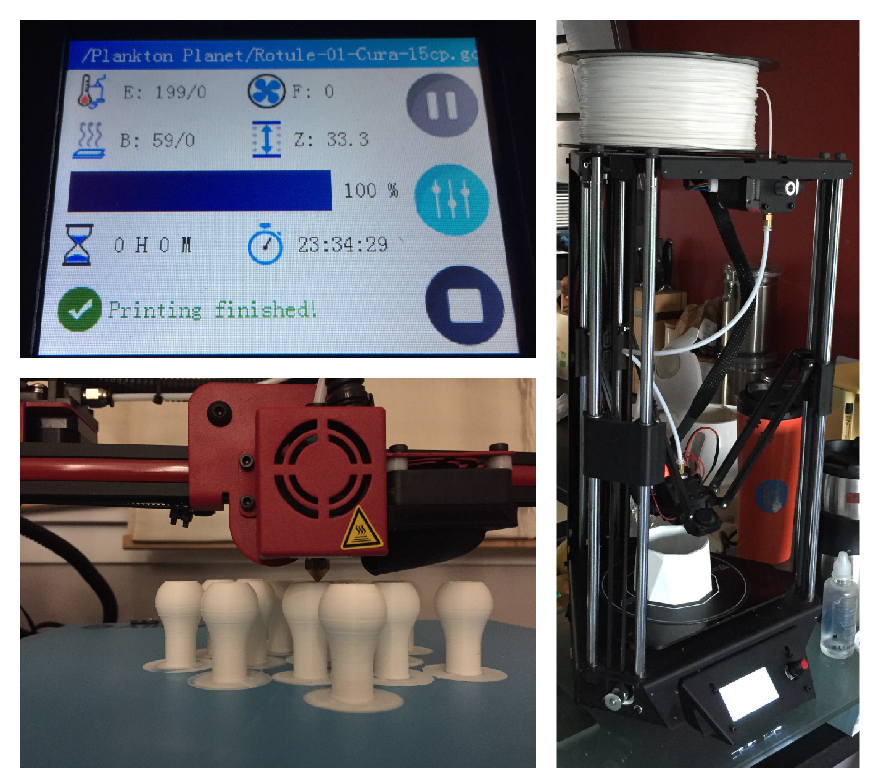 But that’s not all; we must also manufacture the lamps using 3D printing. Thirty lamps in total, and for each no less than 7 hours of printing; that’s 9 full, 24hr days of printing!! For the cabinet of curiosities, we make a shelf in the shape of a honeycomb. Each junction is also built with a 3D printer. We have to make 122 of those… again 250 hours of printing. We also need to produce the display cases, the wooden bases, the table, the chairs… The task is immense. 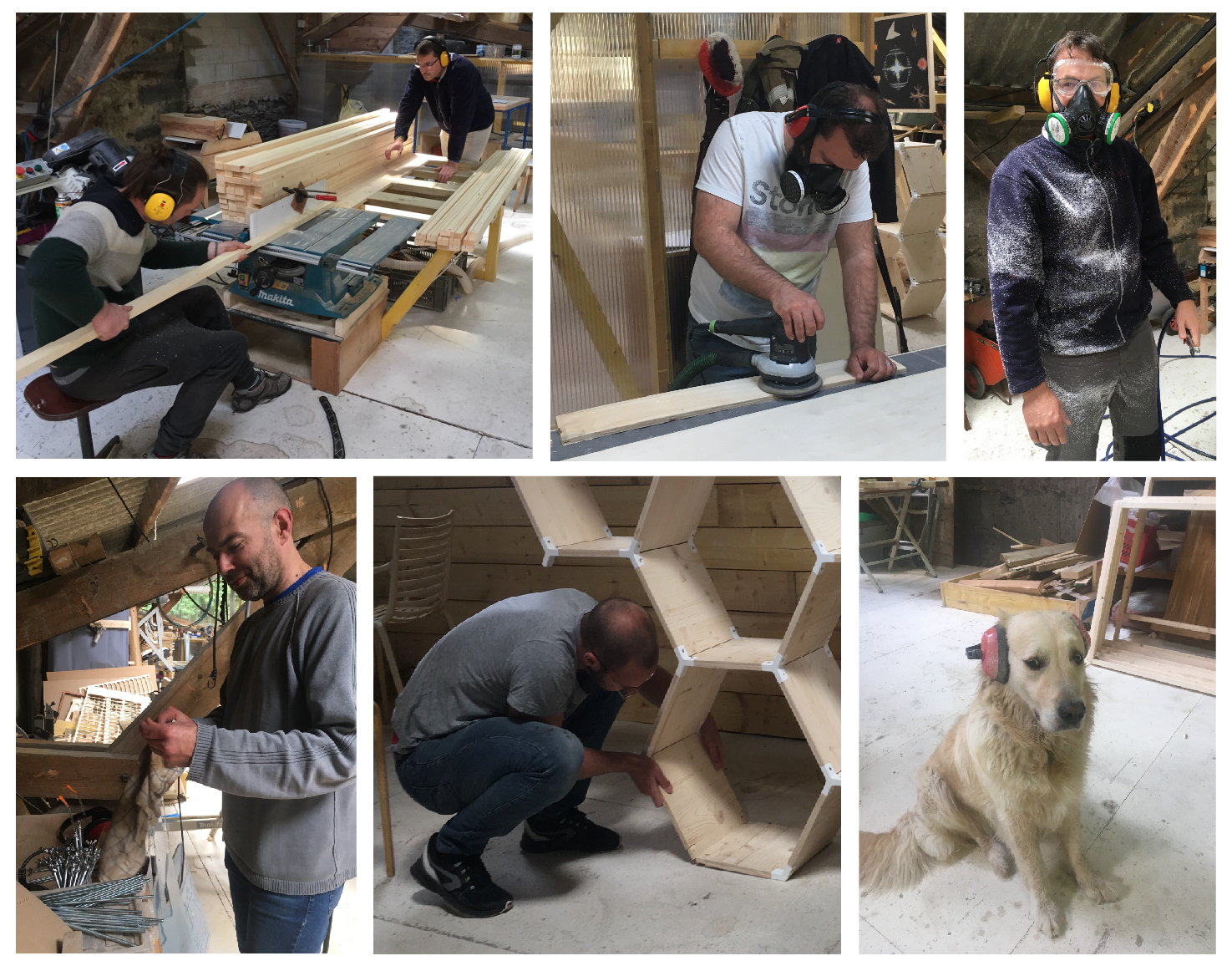 April has gone by, it is already mid-May. We are both exhausted; we have not had a single day off for many weeks. We have made very good progress, but there is still a lot to do. We’ve asked for help from the whole Plankton Planet team, from friends and spouses who all respond and come to join us every evening to assemble, varnish and sand the pieces we have made during the day. But we have to face the facts, we can’t do it, we need a third man.

That man will be Jeremy Guyard, a very good friend of David who has just returned from a sailing trip. He is a practical person and the workshop holds no secrets for him. It’s funny, because Jeremy’s mom, Nicole, works at the Roscoff Biological Station… she is the librarian who during my thesis often helped me in my research of books or scientific articles. The world is small!

That’s it, we are at the beginning of June, the final stretch. The elements’ stock for the exhibition start building up, and it’s reassuring. But one big question remains: how is the dome going to look? What if we have made some mistakes? Indeed, for the moment, we can’t know… because the dome has not yet been delivered, as a matter of fact not even manufactured: we will receive it directly in Nantes at the time of assembly! Everything is still speculation… 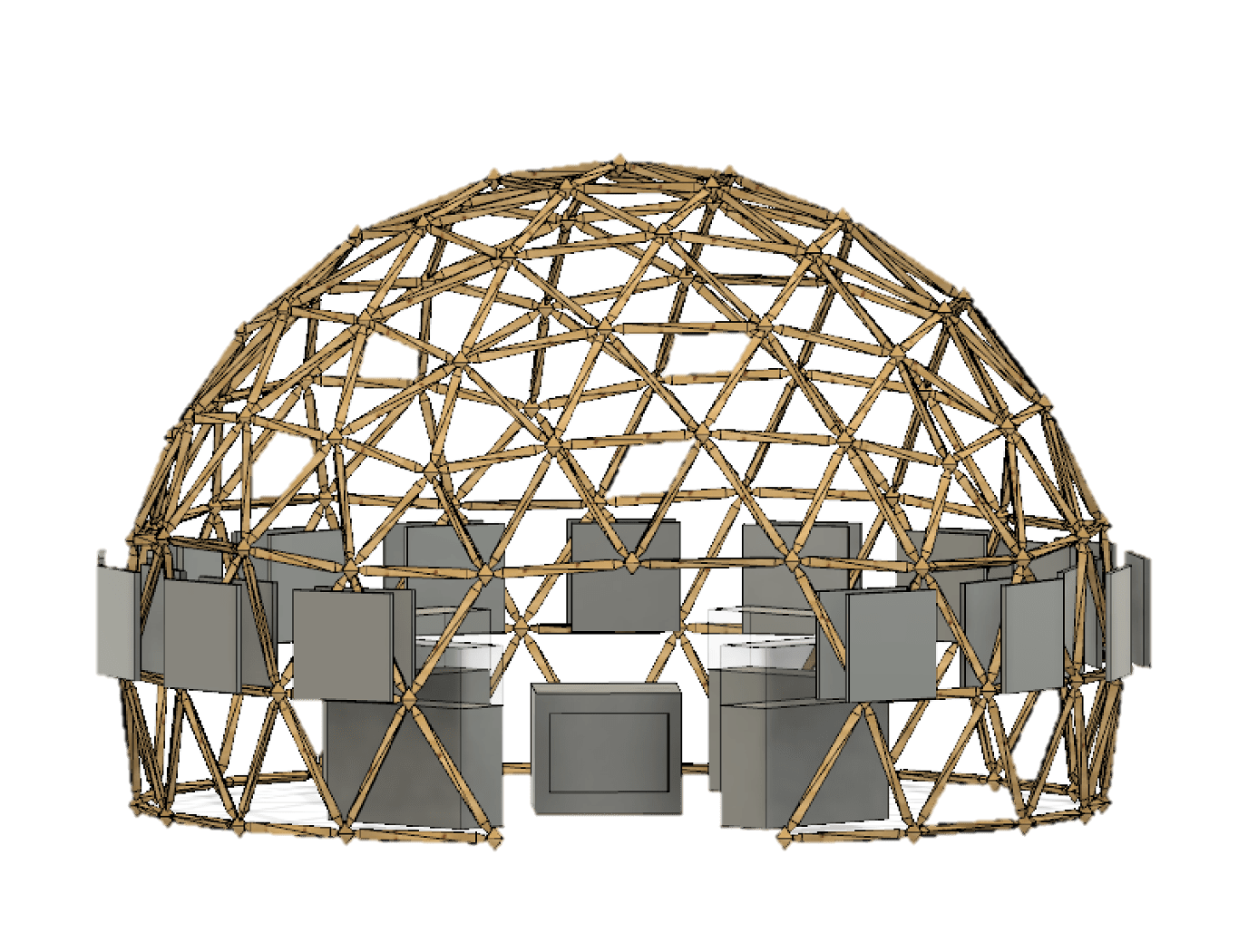 Monday June 24, 2019: it’s the big day, and also a hot summer’s day in France, at around 40°C in the shade. We have just loaded two 15 m3 vans with all the elements for the exhibition. Next stop: Nantes. We’re still missing the centerpiece, the dome that Adrien will deliver us once we get there. And our first job there: mounting the dome. We will need a full day and four people to achieve it. It smells of chopped wood, it looks great, it’s exciting.

Tuesday, June 25, late afternoon: the result is there before our eyes, giant and elegant. Now we just have to dress it with plankton. 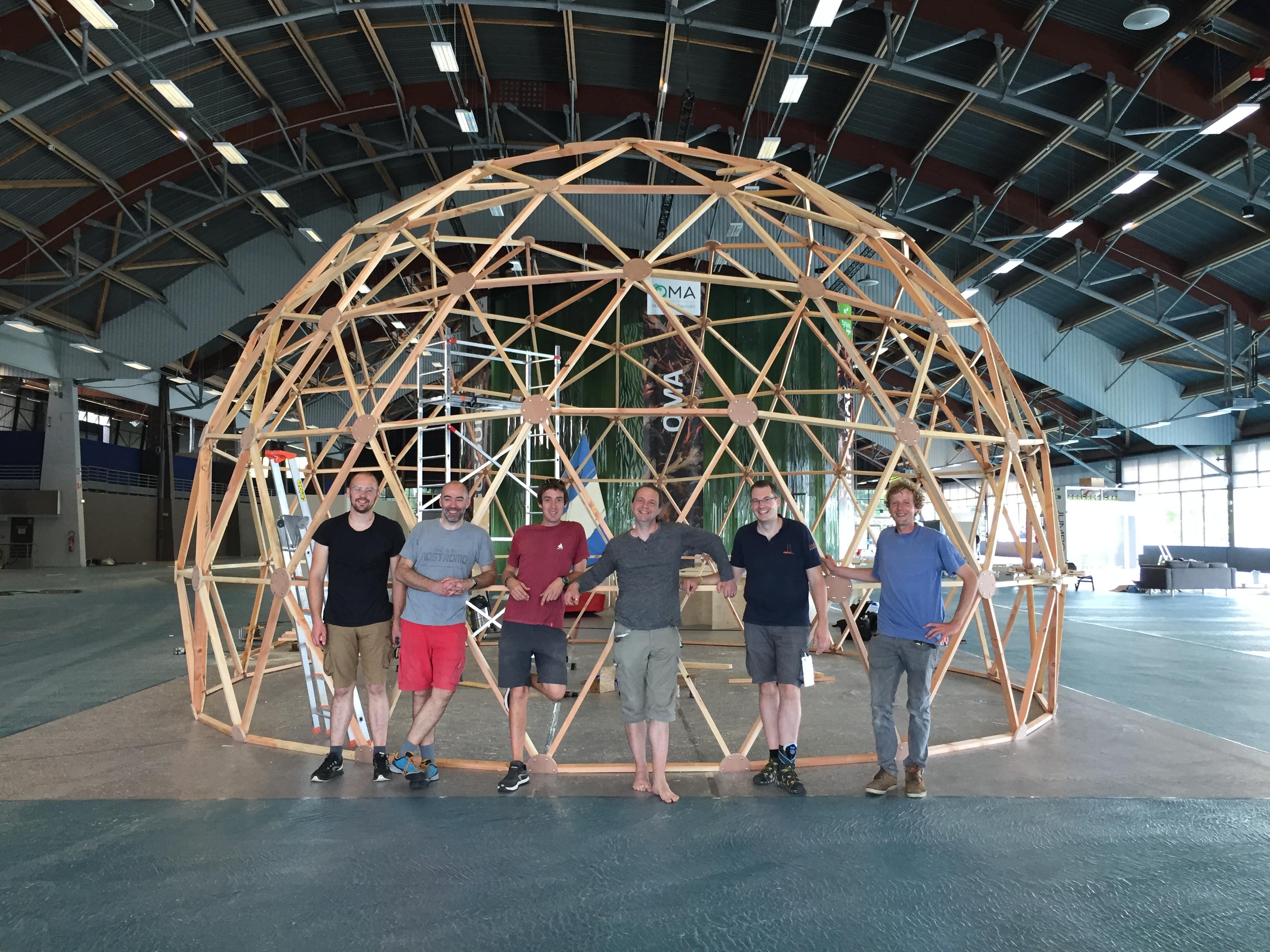 The first steps are stressful, but our calculations were correct, everything is coming together perfectly! Slowly, we start to feel reassured. It will take us no less than 6 days, under blazing heat, to complete this first assembly of the exhibition. But we are happy and proud. The Plankton & Arts project by Plankton Planet is born!